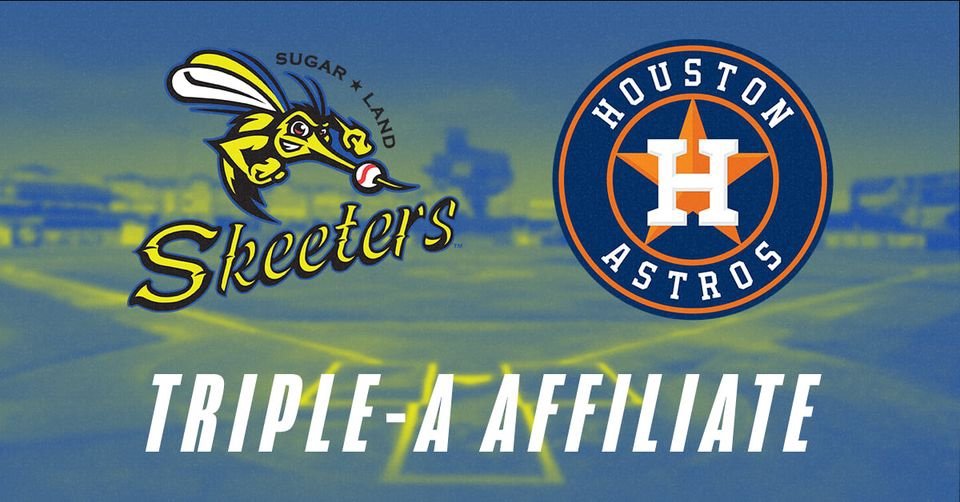 The Houston Astros announced today that the Sugar Land Skeeters will become their Triple-A franchise, beginning in the 2021 season.The Skeeters will become the first-ever independent league baseball team to transition into a Triple-A affiliate. They will begin play in the Pacific Coast League in 2021.“This is an incredibly monumental day for our organization and the city of Sugar Land,” said Skeeters owner Kevin Zlotnik. “We couldn’t be more thrilled to partner with the Houston Astros and are immensely proud to be affiliated with their organization. To become the first-ever independent league team to make this kind of a jump speaks to Sugar Land and our fans for what we’ve been able to create at Constellation Field.” The Skeeters began play in the Atlantic League of Professional Baseball at Constellation Field in 2012 and have spent the last nine seasons at the independent ranks, winning championships in 2016 and ’18.“This is a historic day for our city and community, being able to bring Triple-A baseball to Sugar Land and Fort Bend County,” said Skeeters President Christopher Hill. “To be welcomed into the Astros family and get the chance to continue to showcase our beautiful ballpark and provide our fans with a first-class baseball experience is something we cherish.”The Skeeters are set to join Corpus Christi (Double-A) and Fayetteville (Single-A) as the Astros minor league affiliates, with the Astros holding majority ownership stakes in all affiliates.For updates and more information on the Skeeters, visit www.sugarlandskeeter s.com/ or follow the Skeeters on Facebook, Instagram and Twitter.
Reply
* Reactions disabled on political threads.
What are your thoughts? Log in or sign up to comment Log in » Sign up »

Great. Now parking will be raised to $20 per vehicle
Reply
* Reactions disabled on political threads.

How do you know the cost of parking? Does it say parking is going up?
Reply
* Reactions disabled on political threads.

History tells us the fees will go up.
In the beginning - Parking was Free to all Skeeters games.
In 2018 they started a $5 (cash) parking fee.
So you can expect a Parking Fee increase (they always use the line that it is the same as other venues in the area)
Remember the Astro's now own the team ---- they have to make money - In the sports business they are always after the parking fees.
So you can expect the parking fees to go up now, along with ticket prices.
Reply
* Reactions disabled on political threads.