« Back to Sugar Land News 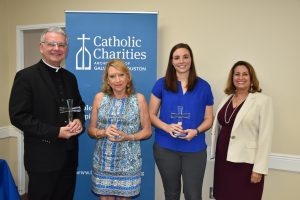 Catholic Charities of the Archdiocese of Galveston-Houston presented its annual Charity in Action Award to steadfast volunteer and Sugar Land resident Christiane Galvani. The honor was announced at the agency’s 2019 Annual Meeting, along with awards presented to a corporation (Sysco) and a parish, or church (Co-Cathedral of the Sacred Heart).
Christiane was acknowledged for her dedication to Catholic Charities’ Refugee Resettlement Program, which welcomes and assists newcomers to the United States as they begin life in a new culture. Christiane spends hours each month tutoring individuals and in English as a Second Language classes.

“When I was thinking about volunteering, I did a lot of research to see which agencies are considered the best at serving refugees,” said Christiane. “Every source put Catholic Charities at the top of the list.”

One example of Christiane’s dedication was in her assistance to a Burmese refugee client. She tutored him for almost one year to prepare him for his citizenship test, which he passed. Christiane gave him moral support by attending his citizenship test, then attended his Oath Ceremony to join him in celebrating the significant accomplishment.

“Christiane is tireless, patient and encouraging with clients,” said Cynthia N. Colbert, MSA, president and CEO of Catholic Charities. “All of the clients she meets are grateful for her time and assistance. We cannot thank her enough for her help.”

The Refugee Resettlement Program helps refugees and other government-approved new arrivals achieve economic self-sufficiency. The program addresses their immediate needs when they arrive in the U.S. and offers ongoing help while they adjust to their new life through cultural orientation, education and job development.

“Catholic Charities brings us together to channel our collective compassion into meaningful action,” said Kevin K. Rech, board chair. “In the last year, we touched 97-thousand lives, bringing help and hope to people in need.”

Related News Stories:
Important Message from the City of Sugar Land Police Department UPDATE: Mayor Zimmerman provides the latest on how the City of S Sophomore at Austin High School in Sugar Land has has artwork display in US Capitol Coronovirus Info/Update

« Back to Sugar Land News & Highlights